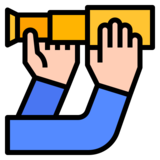 Read, Meditate on the dream that reveals the future of the world, on your watch.

This app is about the dream of Nebuchadnezzar, king of Babylon found in Daniel 2. This dream reveals the future of the world, and how this world is going to end. It predicted the rise of the Roman Empire that disintegrated into different nations now known as Europe. It shows that God is in control and He will establish His own kingdom on earth.

- 22 important bible passages from the King James Version Bible that reveals the future of the world.

- Each passage includes a short explanation in yellow font