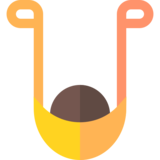 Read, Meditate, Memorise Bible verses about the story of David and Goliath on your watch.

ABOUT DAVID AND GOLIATH

Goliath trusted in his armor. He terrified the armies of Israel by his defiant, savage boastings, while he made a most imposing display of his armor, which was his strength. David, in his humility and zeal for God and his people, proposed to meet this boaster. Saul consented, and had his own kingly armor placed upon David. But David would not consent to wear it. He laid off the king's armor; for he had not proved it. He had proved God, and in trusting in him had gained special victories. To put on Saul's armor would give the impression that he was a warrior, when he was only little David, who tended the sheep. He did not mean that any credit should be given to the armor of Saul; for his trust was in the Lord God of Israel. He selected a few pebbles from the brook, and with his sling and staff, his only weapons, he went forth in the name of the God of Israel to meet the armed warrior.

Goliath disdained David; for his appearance was that of a mere youth untaught in the tactics of warfare. Goliath railed upon David, and cursed him by his gods. He felt that it was an insult upon his dignity to have a mere stripling, without armor, come to meet him. He made his boast of what he would do to him. David did not become irritated because he was looked upon as so inferior, neither did he tremble at the giant's terrible threats, but replied, “Thou comest to me with a sword, and with a spear, and with a shield: but I come to thee in the name of the Lord of hosts, the God of the armies of Israel, whom thou hast defied.”

- 58 Bible verses from the King James Version about the story of David and Goliath.

- Tap on the main verse to read the whole story.

- Tap on the title on the top screen to switch to the main verse.

- Tap on the bottom left/right to move between different verses.

- Tap on the 'Aa' button to resize font. (Font will become small after reaching the maximum size).