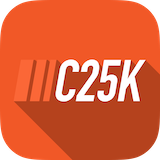 "C25K is easy to use, as you would hope for a beginner app." - New York Times

C25K® is the easiest program to get beginners from couch potatoes to 5K distance runners in 8 weeks. The plan's structure prevents new runners from giving up and at the same time challenges them to continue moving forward. C25K works because it starts with a mix of running and walking, gradually building up strength and stamina.