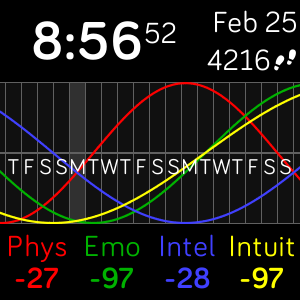 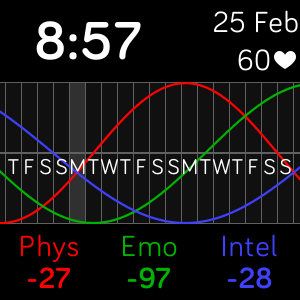 This clock face requires a payment that is managed by the developer in-app.
Share the link

This clockface shows your current biorhythm chart and stats.

Biorhythm theory started in the late 19th century, and holds that our physical, emotional and intellectual abilities vary in regular cycles. Some people advocate a fourth cycle for intuition. Days when the cycles transition from positive to negative, or vice versa, are said to be critical (ie, especially bad).

This clockface graphs your biorhythms for 2+ weeks ahead, and a few days previously. Today’s date is highlighted in grey. X indicates a critical value.

To change settings, long-touch the screen. You can change the date of birth used, which lets you see biorhythms for other people.

The clockface also displays one of the standard Fitbit activity measures (energy, steps, distance, active time, elevation, and heart rate). Touch the screen to cycle through them.

Cost: $1+tax. If you buy the Biorhythm Bundle, you won’t pay any more and you’ll get an app version as well (better for occasional use).

This clock face requires a payment that is managed by the developer in-app.