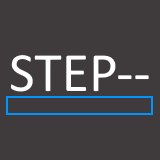 Available to install from
the Fitbit mobile app
Share the link

Steps2Go is a simple step tracker that counts down the number of steps taken towards a set goal. The name is derived from "Steps to go until goal is reached"

Hitting LOWER or HIGHER will raise or lower the step goal accordingly by 50.

You may hold in the button to rapidly change the goal.

I was walking one day and the idea and need for this app popped in my head. This is my first Fitbit app, and I designed it out of the blue. It's nothing fancy, but it has helped me and that's all that matters. I am a goal oriented person, so while raising my steps, it helps to set a goal, such as get up and walk 1000 steps.

Always-On-Display info: I know some of you, myself included, want AOD support, however, Fitbit only allows handpicked developers permission to develop AOD apps. As a small independent programming hobbyist, I have not been granted such privilege by Fitbit.